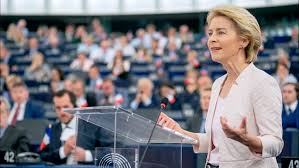 Brussels has opened a file with the United Kingdom for trying to unilaterally modify the terms of the agreement signed in January that sets the conditions for Brexit. The president of the European Commission, Ursula von der Leyen announced the decision.

Thursday in a brief speech in which she regretted that the Government of Boris Johnson had “breached its obligation to act in good faith” violating the terms of the protocol of Northern Ireland through its draft of the British Internal Market Act. After the British prime minister has ignored the ultimatum that Brussels sent him to comply with the Withdrawal Agreement, Von der Leyen has set in motion the gear that could take the dispute to the Court of Justice of the EU .

The European Union had given London until September 30 to amend the draft Internal Market Act, with which Johnson wanted to reverse the commitments reached with the EU on Northern Ireland. Specifically, two: the control of each and every one of the goods that go from the north of the island of Ireland to Great Britain and the state aid scheme.

The law was endorsed by the House of Commons to continue its processing. Community sources explain that in this period London has not only remained impassive to community demands, but has also admitted that its law will modify the terms of the pact that sealed the United Kingdom’s departure from the EU.

The UK has until the end of this month to comment on the letter of formal notice. Brussels will then examine them. If London continues to violate the agreement, community services can issue a reasoned opinion, which would give Johnson a second chance to comply with the provisions of the agreement. But if it persists in its attitude of ignoring Brussels requests, the EU Executive could send the case to the EU Court of Justice .

UK will reply to Brussels

A British Government spokesman, however, stated that the Johnson Government does intend to respond to the letter in due course and insisted on the arguments for “introducing measures” relating to the Northern Ireland protocol. “We need to create a legal safety net to protect the integrity of the UK single market, ensure that ministers can always meet their obligations to Northern Ireland and protect the progress of the peace process,” added that spokesperson.

Brussels believes that this protocol is key to avoiding a border that divides the island of Ireland and puts the Good Friday Agreements at risk . The Commission also believes that Johnson’s decision sets a bad precedent for the negotiation of a trade agreement by breaking trust between the parties.

Also, it rains in the wet. Community sources recall that Johnson has already violated the political declaration that accompanied the Brexit agreement on several occasions, which makes negotiation difficult. The European Commission, however, remains reluctant to leave the table considering that this would only give the British Conservative leader more ammunition.