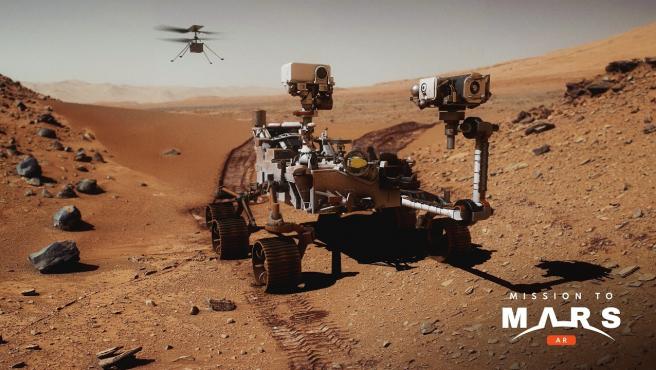 The month of February 2021 is being the month of Mars. A total of three space missions have reached the red planet: Hope, the probe sent by the United Arab Emirates , entered Martian orbit on February 9 and the Chinese probe Tianwen 1 did so two days later .

But undoubtedly the mission that has captured the public’s attention the most has been that of NASA : last Thursday, the US space agency managed to land its Perseverance rover on the surface of Mars, once again making history by posing the heaviest vehicle. expensive and advanced that humans have never sent to the red planet.

For the first time in history, a landing on Mars has been captured on video. This Monday NASA revealed an exciting video of how the landing was – it is the first recording in the history of such a maneuver of a human vehicle on another planet – as well as some images of the area where the rover is located.

With these images we can get an idea of ​​what it would be like to be there. But there is another way to enjoy it as well: it is Mission to Mars AR , an app for iOS and Android that allows you to ‘get on the wheels of Perseverance’, or at least live the experience in the most real way possible for the moment.

Thanks to augmented reality, you can explore the Red Planet as if you were a rover . There is Perseverance, but also the other four vehicles that NASA has taken to Mars .

Not only that: the application will also allow you to fly the first interplanetary helicopter, the Mars Helicopter Ingenuity , bringing “the mission to life through augmented reality experiences based on real equipment and real events”. With Perseverance now on Mars, get an interactive up-close look at this and other rovers that paved the way . You can even drive one down your street.

What can you do in the app?
Meet the rovers. An interactive look at rover design, from science tools to camera power. Drive a rover. Put a rover on your desk, in the office or on the street and then drive it. It even allows you to take photos.

Get to know Mars. Place all of Mars in front of you, turn it around, and discover strange and familiar features. Launch the rocket. Place the Atlas V rocket anywhere you want and launch it with authentic mission audio.

Portal to Mars – Go through a portal to the surface of Mars to see Perseverance in action, then jump into the future to explore a human settlement.

‘7 minutes of terror’. Control the landing sequence yourself and see if you can do better than Perseverance.

Mars Missions – Fight your way through Perseverance missions on the surface. Drive around hazards to complete different objectives, including flying the Mars Helicopter Ingenuity.