Another Discovery Under Ashes A Fast Food Restaurant In Pompeii 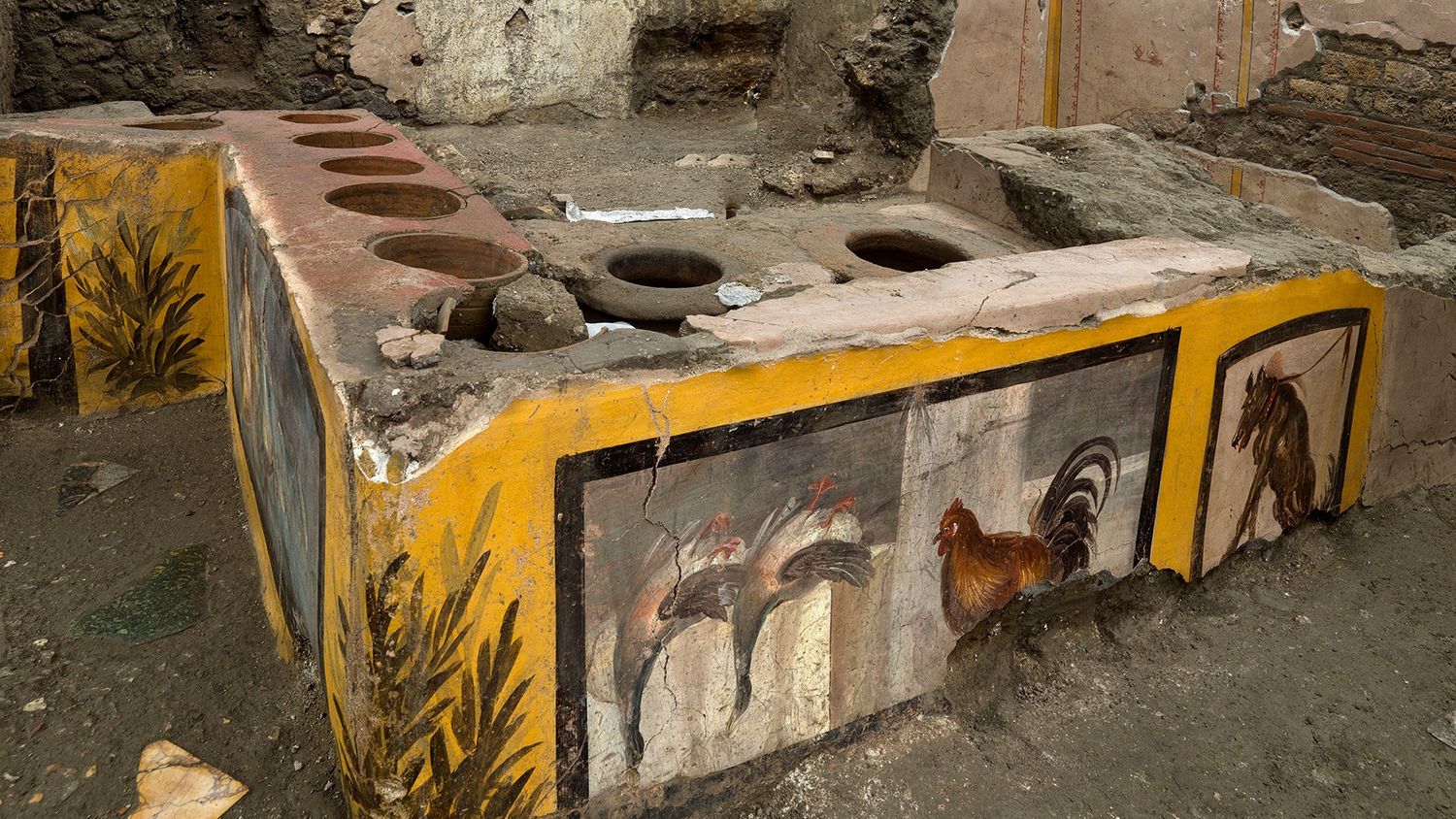 The inexhaustible time machine of Pompeii never tires of shedding glimpses of the past, which sometimes also allow us to know even the flavor of life in antiquity. Archaeologists have discovered there a thermopoly, an establishment where food and drink were served, which remains practically intact.

The decoration, with frescoes of animals painted in such vivid colors that they seem three-dimensional, is preserved almost unaltered and remains of food have been found that have been preserved over the centuries in the same place they were when Vesuvius erupted and the calendar stopped at the foot of the mighty volcano.

This new testimony of daily life that was trapped for almost two millennia under tons of stones, mud and lava is another of the extraordinary treasures that excavations have been revealing in recent years. In this period the archaeological park has entered a second life, with a renewed impulse, especially in the maintenance and restoration of the Regio V area, after a time of neglect.

The thermopoly, somewhat similar to an establishment comparable to today’s street food stalls, was the place where food was served to the lower classes of the city, as the archaeologists explain. Containers found with food remains point to the origin of “take away” gastronomy.

It is known that the Pompeians used to enjoy dining outdoors, encouraged by the climate of the peaceful Gulf of Naples. In the thermopolies, as its name of Greek origin indicates, you could eat and drink hot sustenance that was kept in large containers called dolia, which were embedded in a masonry counter.

They were very common in the Roman world, only in Pompeii there are about 80 establishments of this type, but none have the bar completely painted like this, which confirms the exceptional nature of the find. The counter, preserved by volcanic ash, had been partially unearthed in 2019, but work was extended to try to preserve the entire place as well as possible.

Experts are already studying, with interdisciplinary techniques, the new material to see how this discovery can expand the knowledge about the diet and consumption habits of Roman times.

“In addition to being another testimony of daily life in Pompeii, the possibilities of analysis of this thermopoly are exceptional, since for the first time an entire environment has been excavated with cutting-edge methodologies and technologies that are returning unpublished data”, explained Massimo Osanna, general director of the Archaeological Park of Pompeii.

When they began to excavate, what the archaeologists first came across was the decorations on the thermopoly counter: the image of a nereid (nymph) on horseback in a marine environment, in addition to other animals, such as a rooster, or a duck, brightly colored.

They also found an illustration similar to a commercial sign for the store and different pantry and transport objects: nine amphorae, a bronze container, two jars and a ceramic pot.

The first analyzes in the laboratory confirm that the paintings on the counter represent, at least in part, the food and beverages that were actually sold in the thermopoly.

In fact, fragments of duck bone have been found inside one of the containers, together with remains of pig, kid, fish and land snails, which testifies to the great variety of products of animal origin that were used at the time to preparing the dishes.

In addition, ground beans have appeared at the bottom of a bottle, which according to scholars, were used to modify the flavor and whiten the color of the wine. In one of these drawings, that of a dog, there is an inscription that defines the eschatological humor of the time: “Nicia cinaede cacator” (Nicia is a fag shit), probably an insult to the business owner.

Another interesting fact is that in the same room, behind the counter, human bones of victims of the violent eruption have also been discovered. In this case, unlike the large number of perfectly preserved bodies that have emerged over the centuries, the remains are seriously damaged by the passage of clandestine excavators who during the 17th century plundered the site in search of valuable objects.

Experts believe the bones belong to an individual in his 50s who was lying, probably in a bed, when the terrible pyroclastic lava flow that swept through the city arrived. Other bones have also been found, yet to be investigated, inside a large container, probably placed there by the first looters